Going to the pumpkin patch and finding the perfect pumpkin to carve into a Jack o’ Lantern is something I’ve grown up with and just found to be relatively normal. When I really thought about it, though, I wondered why such an odd activity seemed so common. Perhaps, that same thought process could be applied to many other areas of our lives, but today, we’ll be looking into the origins of the Jack o’ Lantern. 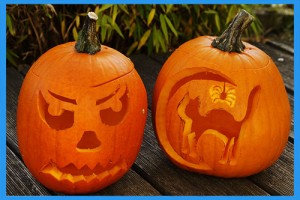 What is a Jack o’ Lantern? Typically, a Jack o’ Lantern is a pumpkin with the top cut into and removed to form a lid. The inner contents are scooped out of the pumpkin and may be used for other purposes such as roasted seeds and pumpkin recipes. The remaining hollowed out pumpkin rind can then be carved into far enough to see the inside. Often the carvings are of images or faces and have a light source placed within the pumpkin. Traditionally, candles have been used to give the lantern effect, but other methods such as glow sticks or battery powered lights are available as an alternative.

But exactly why do we carve into hollow pumpkins? The origin is actually quite interesting and a little spooky, really.

The term “Jack o’ Lantern” has been used in reference to a strange phenomenon of lights that flicker over peat bogs. These lights are also sometimes called “Will o’ the Wisp” but don’t necessarily explain the carving of pumpkins. That’s where the 19th Century Irish tale of “Stinky Jack” comes into play. 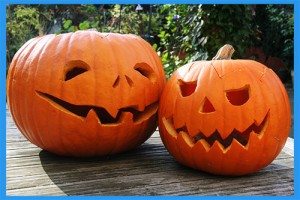 This legend tells a story of a man named Jack who supposedly invited the devil to have a drink with him. Strangely, the devil did and Jack wasn’t a gentleman when he stuck the devil with the bar tab. As the story goes, Jack simply wanted a free drink and thanks to his less than courteous behavior, he was doomed to spend eternity paying for it. After he passed away, his punishment was to wander in the dead of night with nothing but the light from an ember of a single coal. He carved out a turnip to create a hollow lantern for this ember and acquired the name “Jack of the Lantern” in doing so. An abbreviated version, “Jack o’ Lantern”, is what we know him as today.

Because of this tale, the Irish began to carve out vegetables in his likeness. Some say that these vegetables were meant to be a deterrent to keep Jack away from their homestead. Others say that these lanterns were meant to light the way for good spirits. Whatever the reasoning may be, the faces carved can be quite scary and I’m not sure that any good spirit would be too happy to see them.

When many Irish families immigrated to America in the late 1800’s, they discovered that pumpkins made wonderful lanterns. Though, they didn’t grow pumpkins in Ireland, using turnips seemed less appealing once they had access to them. 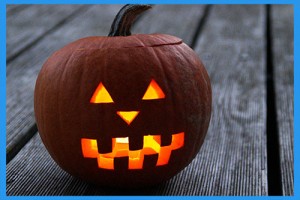 Now, we continue this tradition by carving pumpkins every year and using them as a means of decoration. When you carve your pumpkin, what purpose are you carving it for?