We’ve all seen them, those pesky insects, but have you ever wondered what they do when you’re not looking? Today, we’ll be taking a peek at what these particular pests look like, how they can impact your prized garden, and ways to prevent them from wreaking havoc on your plants. 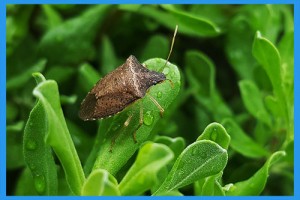 Stink Bugs are cute brown shield shaped insects a little more than ½ in. in length and width. They are considered a nuisance but are rather harmless, unless they’re in a garden. They attack fruits and vegetables and feed on the plant juices. However, if there is only a few of them, the damage is not so great, but if there is a large number- you’re in for some problems. You can use natural repellents in your garden, perhaps you’ll consider spraying your plants with kaolin clay (mineral clay) solution. This solution prevents Stink Bugs from laying eggs on your plants, thus keeping their population in check. 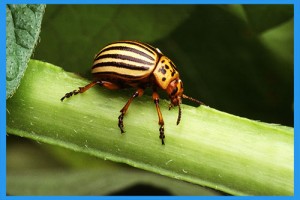 The Colorado Potato Beetle is a ½ in. round beetle that’s colored yellow and orange. It also has long black stripes on its wings, and black spots all over its head. This beetle destroys tomatoes, peppers, eggplant, and as its name suggests- potatoes. They feed of these plants so much that they may even kill them. Some ways to deal with an infestation include applying neem oil, picking the bugs off and putting them into a bucket of soapy water, vacuuming them off of your plants, and using diatomaceous earth to kill them. Personally, I feel bad that they’re a problem simply because they love eating potatoes. 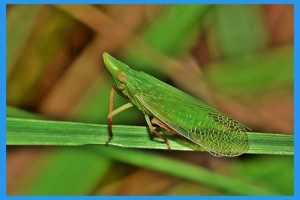 The Leafhopper is about ¼ in. long and is a slender, wedge-shaped insect. They can be green, yellow, brown, or even colorful and are rather anxious creatures, scattering immediately when disturbed. The nymphs are of a lighter color than the adults and don’t have wings. These insects damage plants by feeding on sap from leaves. The damage is similar to spider mites and can lead to a dark excrement on your plants. Some ways to deal with Leafhoppers are to spray insecticidal soap or use kaolin clay solution on your plants, just like with Stink Bugs. You can also clear plant debris, giving them few places to shelter. Another option is spraying them with a strong stream of water to remove them. Yes, you can simply spray them with water. 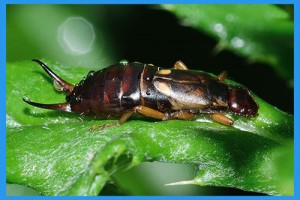 Earwigs range from ¼ in. to 1 in. long in size and have long, flattened bodies. They can vary in color from a light brown with dark colored markings to maroon and black. As a child, I used to simply call Earwigs, “Pincer Bugs”, because of their pincers, or forceps. But it turns out that they do not sting, nor are they poisonous and are relatively harmless to humans. Plants, on the other hand, suffer from Earwigs. These insects chew irregularly shaped holes into petals and leaves. They also tunnel into flower buds and consume seedlings. Some ways to remedy this situation would be to, again, use diatomaceous earth or get a little more creative by setting a trap. Earwigs are attracted to damp places, so using things like a damp newspaper or tuna can to catch and remove them may be a little more convenient. Another option is to attract their natural predators such as birds or lizards. 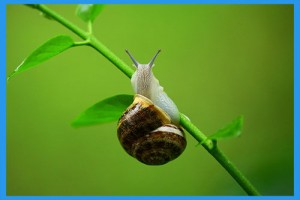 You may be familiar with Garden Snails, but in case you’re not, they have soft, jelly-like bodies, covered with a slimy mucus. Their bodies are a light brown and their shells are cream colored with spiral stripes of dark brown. They grow to be a little over an inch in height and are about the same in length. The Garden Snail may be charming and whimsical but it chews through leaves so much that it can kill the plant. So, what can you do to stop these hungry, hungry snails from making your garden a wasteland? Some ways include introducing their predators to your garden. Snakes and Decollate Snails will eat Garden Snails but will leave your garden alone. You can also lay down gritty substances such as diatomaceous earth, sand, or crushed eggshells, which will injure and eventually kill them. A common trap is setting out a shallow pan of beer. Garden Snails are attracted to yeast so they fall in the beer and drown. Now, I think that this is all a little cruel, so another option is to simply put up barriers they can’t cross. Copper wire, petroleum jelly, and strategically placed mesh can all help end the war with the Garden Snails. 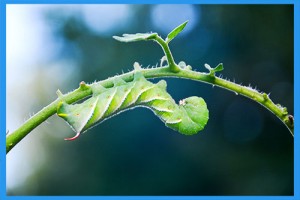 Tomato Hornworms are large, green caterpillars. They have black and white markings on their bodies, a horn-like protrusion extending from their rear, and 8 “V” shaped stripes along their fat 4 in. body. These caterpillars aren’t harmful to humans as they do not bite or sting, and they eventually reach full maturity as Magnificent Sphinx Moths. The only trouble with the Tomato Hornworm is that it really loves tomatoes. It can leave tomato plants leafless and cause extensive damage by creating holes in flowers and fruit overnight. These caterpillars are uniquely camouflaged among the stems and leaves of tomato plants, making them difficult to detect. One way to deter them is to cultivate, or till the land from spring to fall every few weeks to help prevent the pupae burrowed in the ground from maturing. You can also hand pick them from your garden from dusk until dawn and develop a plan as to what you’ll do with them when you find them. Another way is to attract the moth version of the Tomato Hornworm into a light trap, killing them, and preventing them from laying eggs. Other ways include introducing predators, parasites, and insecticides. There really is no happy ending for the Tomato Hornworm, unless you keep one as a pet or something. 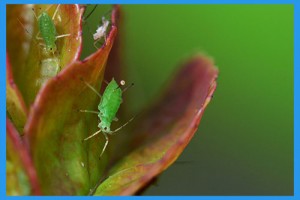 Aphids are tiny pear-shaped insects with wings, also known as greenflies or plant lice. They are only about ¼ in. and are nearly invisible from a distance. They do come in a variety of colors, though. They can be black, white, gray, pink, yellow, green, or brown. Aphids may also have a woolly or waxy coating. They damage plants by feeding on plant sap that, when excessive, can cause the leaves to turn yellow and wilt. In large quantities, Aphids can also stunt shoots and leave behind large amounts of a sticky exudate called, “honeydew” which can turn black and attract mold. Some species of Aphids inject toxins into plants, thus curling their leaves and distorting their growth. A few ways to get rid of Aphids included spraying them off of plants with a strong stream of water from a garden hose and picking them off by hand and then dropping them into a bucket of soapy water. Neem oil and homemade sprays of either liquid soap and water or essential oil and water are also common methods to remove them. Introducing predators such as Lady Beetles, Green Lacewings, and Birds would also probably work. Especially if telling them to pound sand doesn’t. 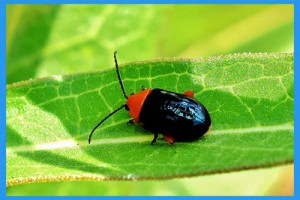 Flea Beetles are rather small, only about 1/10 in. long and are shiny. They can be dark brown, gray, bronze, or black and some have yellow or white stripes. They also have large back legs that allow them to jump around. These little insects chew irregularly shaped holes into the leaves of plants, usually vegetables. These holes can wilt and stunt the plants, making these beetles a serious pest. Some ways to protect your plants from Flea Beetles include using floating row covers, diatomaceous earth, kaolin clay, neem oil, and yellow sticky traps. It’s also recommended to use insect sprays and preventative measures like clearing your garden of debris so they have no place to use as shelter. They will have no protection from the cold. 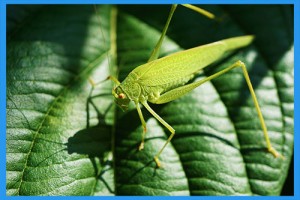 Grasshoppers are a medium sized insect, generally under 2 in. depending on their species. They have chewing mouthparts and 2 pairs of wings. Their bodies are long and narrow, including a pair of long hind legs for jumping. They are generally green, but can be olive or brown and can also have red or yellow markings. These insects are like most other herbivores- they simply want to eat grass, leaves, and plant stems. They can destroy gardens by leaving them ragged and empty, something that no gardener wants. Some ways to control Grasshopper chaos is to till the ground to uproot any eggs, reduce weeds and debris in your garden to eliminate a food source for nymphs, and covering vulnerable plants. Attracting natural predators like swallows, praying mantises, snakes, and toads, may also help to keep the Grasshopper population at a reasonable level. You can even use a garlic spray as well as raise chickens to help deter these creatures. Of course, spray pesticides are always an option, but I’d like to give the grasshoppers a fair chance.

After researching these particular pests, I find that most of them have something in common- they just want to eat their fruits and vegetables. Most humans don’t even want to do that. It’s pretty simple, though. Insects need to eat to live, but your garden is not intended to be a bug buffet. If you’re having trouble with any of these pests, I encourage you to try to find humane ways to deal with them, but I understand. Sometimes you just want to get the problem solved as quickly as possible. Whatever the case may be, I hope that your garden grows stronger and more beautiful with every obstacle. Speaking of ways to make your garden beautiful, here at Fifthroom, we have a great selection of Garden Accents and Bridges as well as Bird Houses, Feeders, and Potting Benches. Even if you’re just looking to ponder over a dream garden from the comfort of your backyard, we have Garden Structures, Dining Sets, and so much more. So, if you’re looking to add a new level of sophistication to your outdoor living space, you know where to find us- Fifthroom.com!