A unique form of garden decor that you may have encountered is that of the Wishing Well. It’s a beautiful addition to lush outdoor spaces and is a whimsical place where you might find yourself making a wish just because.

The Wishing Well has its roots in many cultures and some of that folklore still lingers today.

Typically, a well is a structure that is created by digging deep into the ground to access resources like water. This technique is often still used in rural areas as well as developing countries and has been around for more than eight thousand years. 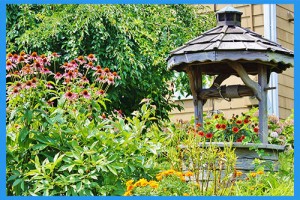 You can mostly identify the well by the rounded wall made of brick or concrete surrounding a deep hole in the earth. Some have lids or a roof-like structure and may also have some sort of pulley system used to gather water.

When a home was in need of this water, a person would lower a bucket secured with a long line of rope deep into the hole, and when their bucket was filled with the water from below, they would draw it back up by pulling the string or using their pulley system.

In German and Celtic traditions, these wells were seen as sacred places and were thought to have healing powers. It was also believed that spirits guarded these wells and that you would have to pay them for access to their water. This idea could explain why we drop coins into wells. Back then, when a coin was dropped into the well, it was also an opportunity to make a wish. They believed that if the coin would land heads up, their wish would be granted, but if it landed tails up- it would not. 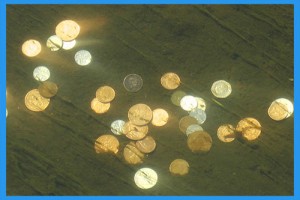 There is room to believe, though, that people who dropped coins into wells unknowingly improved the water quality. There are biocidal properties to both silver and copper, metals commonly found in coins. By throwing these metals into the well and making a wish, people may have caused the water to have healing properties for things like bacterial infections, leading them to believe that their wish had come true or that the water was enchanted. If you really thinking about it, perhaps it is enchanted. What is the likelihood that some gesture like tossing coins into water would actually result in a solution like healing?

Whatever the case, these Wishing Wells have stood the test of time and are still well known today. Here at Fifthroom.com, we truly enjoy giving our customers the opportunity to add one of these wells to their outdoor space. You may not need to dig a deep hole into your yard, but you can add a container of water in the base of your Wishing Well garden decor and make a wish. Who knows? It just might come true. 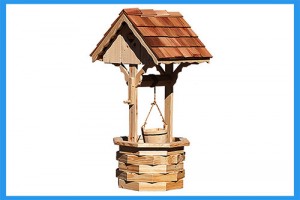