As we enter the autumn season, one thing you may notice, other than the changing colors of leaves and the cool, brisk weather, is the geese flying overhead. Since we’re located in Pennsylvania, the sight of geese is all too common and I thought that it might be a nice gesture to pay homage to the dandelions of birds. 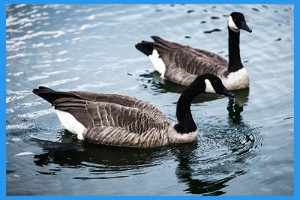 Before we dive into the fun facts of geese and their migratory patterns, I’d like to take you on a brief trip down memory lane. I have some cousins who are… what’s the word? Rambunctious? Well, one of them in particular shared a memory that has always stuck with me regarding geese. He was at North Park and must have been trying to show the geese there his superiority as a human being, and as far as I’m aware, it didn’t turn out so well. Face to face with a goose, he found that he just didn’t have what it takes to overcome their kind. These birds are highly aggressive when they feel threatened and they will hiss at you, chase you, and flap their wings angrily. My cousin was bit by a goose and he never let us forget it. He lost the battle and he warned us that they are not our friends. In his mind, we shouldn’t even look a goose in the eye. I always found it funny, though, because they were simply defending themselves. He was chased by a whole flock, and the one in the lead just happened to get the better of him.

Now that you understand just one perspective on geese, let’s discuss what they’re really like. 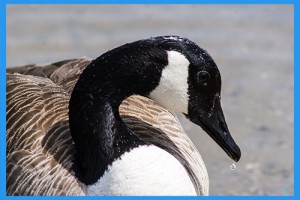 Here in Pennsylvania, the most common type of goose is the Canada Goose. It’s a large bird with a black head and neck as well as white cheeks. Its body is primarily brown and it has large wings. These geese are sometimes called, “Honkers,” and are usually deemed pests. You’ll find them swarming grassy parks and areas with large bodies of water. These birds are very good at adapting to the progression of man and seem to be a force of nature. Even though they are strong and smart animals, they have a bad reputation because they leave large amounts of excrement, are rather noisy and aggressive, and depreciate crops. These geese also have developed a habit for begging as well as digging in garbage cans for food.

Canada Geese are primarily herbivores and their diets consist of grains and green vegetation like grass, as well as beans, aquatic plants, and some small insects and fish. Off the record, I would dare to say that if you threw them a Chicken McNugget, they might eat it. You’ll likely find them grazing in wide clearings with lawn grass. They really like to eat lawn grass. 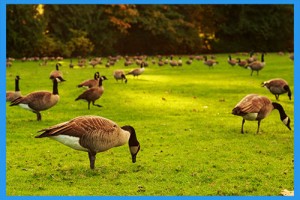 As rowdy as these birds are, one thing that they got right was how to be good mates and parents. When they’re two years old, they find a mate and they stay with that mate until one of them dies. Yes, they are loyal and practice monogamy. Every year, both the male and female may come back to the same nesting place and raise their young. The female lays an average of 5 eggs a year and then incubates them for about 24 to 32 days. The male and female work as a team to protect the eggs but ultimately, the female spends more time at the nest.

These nesting areas are often located in an elevated area near a body of water. The nest itself is usually composed of down feathers and a collection of plant material and it sits in a shallow depression. Egg laying season is largely dependent of weather conditions because warmer weather increases the likeliness of a successful hatching. 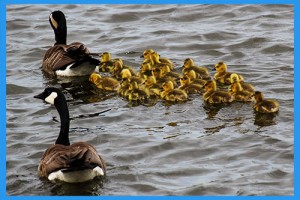 When the baby geese, called, “goslings,” do hatch, they are already capable of swimming, walking, and the ability to find food for themselves. The parents escort the goslings in lines with a parent at each end. Now is the time to remember that they really love their goslings because they can become incredibly aggressive when anyone so much as looks at their babies wrong. They usually give off a warning before they attack but are very serious when they do so. They will fight you.

Geese are very protective of their goslings up into their fledgling stage, which is around 6 to 9 weeks of age. The fledglings don’t leave their parents until after the spring migration when they arrive back at their birthplace. Geese can even be hostile to unfamiliar geese, but they sometimes form groups with other adults and goslings called, “Creches.” Together, they can protect each other and the babies from predators. 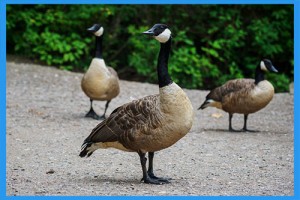 In the wild, Canada Geese can live anywhere between 10 to 24 years old, though the oldest goose on record was recorded as 31 years of age. 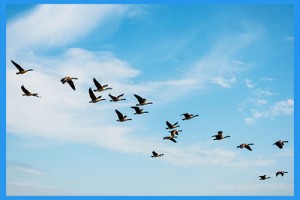 Canada Geese are also very recognizable while migrating. They fly in a distinctive V-shaped pattern that can reach anywhere from 3,000 feet to 29,000 feet in altitude. The position at the very front of the formation is not simply help by one goose, but rather, rotated among various geese because flying in the front consumes the most energy. It is also suggested that certain hormones in their bodies are released during times of migration in order to provide the strength for each goose to make the trip.

Geese may leave their summer home anywhere from September to early November. They have designated resting areas where they join other geese in migration and often make the same trip every year. Those who leave early seem to make less rest stops, while the geese who leave later seem to make more. They leave their winter grounds much quicker than they leave their summer grounds because who isn’t eager to munch on the grass up north? Some geese don’t even feel the need to migrate at all if their summer home is warm and has enough food for winter. 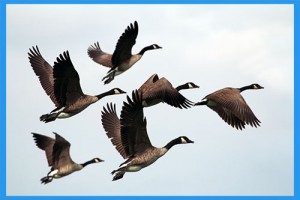 All in all, geese aren’t that bad. Be nice to them, give them space, and maybe say a few positive words when they stop traffic to slowly cross the road.

If you’re looking for a show during the fall, why not visit Fifthroom.com and set your outdoor living space up to be a comfortable spot to watch these birds fly the skies to warmer areas. Remember, they’ll be home next year. You don’t have to miss them too much.