You’ve probably seen Weather Vanes before. Most of us have. They seem more like intricate accents placed on the cupolas of barns and other outdoor structures. The interesting thing about them, though, is that they serve more of a purpose than we realize. Yes, they are lovely decorations, but understanding them and their role in the past can help us to better appreciate them now. That is why we will be looking more into them today. 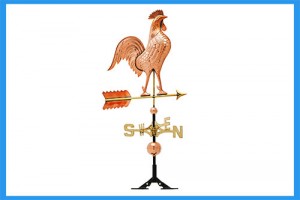 Weather Vanes have gone by a few different names, only a few of which I’ll mention here. They’ve been known as Wind Vanes and Weathercocks, describing the rooster that historically took position on top of the rotating arrow. These instruments are placed on tall structures for a reason. Their function is to determine the direction of the wind, and when placed up high, they display a better reading thanks to purer airflow and less interference.

Weather Vanes are quite possibly the first weather instruments ever used. They point towards the source of the wind because of the way they are built. The most vital piece of the Weather Vane is the pointer. It is usually tapered at one end and is intended to catch even the slightest breezes. There is a balancing weight at the pointer of the arrow and the surface area at back of the arrow is lighter than the pointer. The pointer acts almost as a scoop, catching the wind, and then turning with it. When a breeze is caught, the airflow is distributed evenly across both sides of the arrow and the opposite end of the pointer then balances out, allowing it to point in the direction in which the breeze came. Determining the direction that wind is coming from is key to knowing where new weather patterns may be coming from and where they’re headed to. 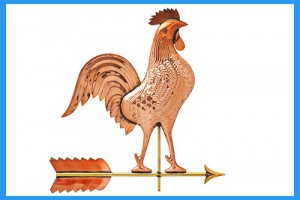 These devices have been around since the first century in Ancient Greece. The first Weather Vane on record was built out of bronze by Andronicus in Athens. He sculpted a Weather Vane that depicted the Greek god, Triton, a half man, half fish, ruler of the sea. Triton’s hand was used as the pointer and would point in the direction in which wind came.

Weather Vanes continued into the ninth century where they were used by Ancient Romans on the tops of domes, churches, and steeples. The Pope selected the rooster as a symbol to be displayed by Christians as a possible reference to Jesus’ prophesy concerning Peter. Nevertheless, the rooster was a wise decision in regard to design because its tail is the perfect shape to catch the wind. The rooster continued to be used as the ideal accent on Weather Vanes throughout Europe and America for hundreds of years. Some might say that the rooster symbolized the victory of light over darkness, while others believed that roosters are the first to see the rising sun, playing into the behaviors of the animals crowing at dawn. However, roosters were soon replaced by other animals.

George Washington was recognized as an avid observer of weather patterns, recording much of what he saw in journals. It is widely debated if his records were worthy of consideration, though, due to a lack of organization and scientific protocol. His findings often seemed subjective and not taken with the proper instrumentation available at his time. Regardless, he was committed to taking notes and studying patterns, and even invested in a custom Weather Vane that he placed in Mounter Vernon. Particularly, this Weather Vane, designed by the architect Joseph Rakestraw, was unique in that it did not depict a rooster, rather a dove of peace with olive branches in its mouth. This Weather Vane was one of George’s favorite instruments and is still located in Mount Vernon today. 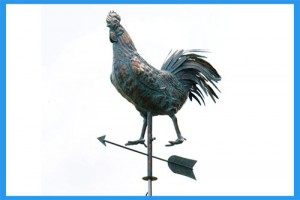 Even in Colonial Times, Weather Vanes were highly regarded as an American tradition. Most commonly, you’d find these devices in rural areas, on the tops of barns, houses, and places of public gathering like town halls and churches. In a house at Monticello, Thomas Jefferson had a Weather Vane that was designed with a pointer that extended to a compass rose on the ceiling of the room located below. His intention for this device was to see the direction of the wind even while inside his house.

More creative versions of Weather Vanes began to make way and people enjoyed depicting themes of their territories and lifestyles. Communities near the coast would portray whales, ships, mermaids, and fish, while farmers now had an assortment of pigs, sheep, bulls, and racing horses. Even a grasshopper Weather Vane on top of Faneuil Hall amused those living in Boston, Massachusetts.

During the 1800’s, more patriotic versions of Weather Vanes became the trend, along with feral eagles and the like. At times, these instruments became highly elaborate but soon found their way back to the simplified version that we commonly see today. Taking a look at the wide variety of styles and shapes that the Weather Vane has undergone is a testament to just how timeless and useful this instrument is.

If you’re looking to appreciate a Weather Vane first hand, Fifthroom.com is the place to start. Come see some of the unique designs that we have available, and you may soon be an avid weather observer yourself. 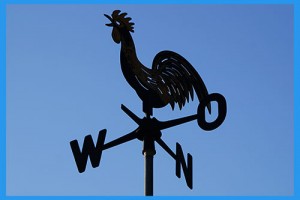