Tomatoes. Big, red juicy tomatoes. Or small, fleshy ones. Or tiny, viny ones! Did you know that there are over 10,000 varieties of tomatoes being cultivated worldwide? Wow! Tomatoes have a very long and circuitous history. Really! They are the vegetable that is technically a fruit. They are the fruit that was once considered inedible because it leached lead out of pewter flatware and poisoned people. And there was even a Supreme Court decision on whether they were fruits or vegetables, since growers had used the “fruit” designation as a way to avoid taxation! Botanists believe that the Aztecs, as far back as 700 AD, originally cultivated tomatoes. In today’s terms, that means they basically came from what is modern day Mexico. Tomatoes are a staple of kitchens and cooking now, but (in the US at least) that’s only been the case since after the Civil War in the late 1800s. Today, however, they have grown to be America’s most popular vegetable. And, at least for our purposes, that’s what we’re going to call them! Vegetables! And delicious ones at that! So, how to find the best varieties to grow in your garden and then taste incredible in your favorite recipes? It isn’t easy! I know that I’ll often wander down my local garden center’s aisles in the spring and get very confused! Do I want one that blooms early or late? Do I want hybrids or heirlooms? What size is best? What level or acidity or sweetness? Our goal here is to give you some guidance. 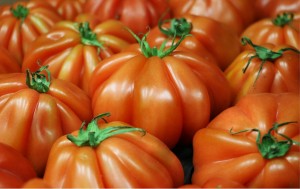 Let’s take heirlooms first. And the first question is, what exactly is an heirloom tomato? Is it just an old variety that has gotten popular again? Yes and no. Heirlooms are older cultivars, but the real difference from your run-of-the-mill tomato is that they have, for the most part, never been hybridized. That is, they have never been crossbred in an effort to breed out or breed in, certain desirable characteristics. Most have been handed down for generations and are generally 50+ years old. As the production of fruits and vegetables became more “scientific” in the middle of the last century, producers sought ways to alter their crops for a number of reasons. One was consistency. Buyers in grocery stores tended to want all of their apples, oranges and tomatoes to look alike. As more people lived in cities and lost contact with the actual growing process, they weren’t used to fruits and veggies that might have a slight visual flaw. So, apples with even a hint of brown on their skin were rejected. Ditto for tomatoes and many other fresh products. Another desire for those hybrids was to create fruits and vegetables that had a much longer shelf life. It seems odd now, but there was a time, not too long ago, when these products were much more seasonal — you could only get them when they were being harvested somewhere in the United States. Now, you can pretty much get whatever you want, whenever you want it! 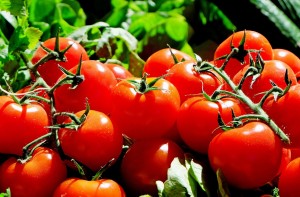 A recent New York Times article points out this amazing statistic: “More than half of the fresh fruit and almost a third of the fresh vegetables Americans buy now come from other countries.” -New York Times – This would not have been possible without intense hybridizing and cross-pollinating that allows those items to be able to be stored and shipped for longer periods of time. But what’s been lost in the process? Many chefs and growers agree that rich, intense flavor has been left behind in this search for a more consistent product. And this is why people have begun to embrace heirloom varieties. Personally, I find my reaction to an heirloom is usually instantaneous; it just tastes better! Sometimes, shockingly so. Heirlooms come in an amazing range or sizes and types and color pallet. Here are few samples of our favorites:

Brandywine. A really large variety that is late-blooming. They balance sweetness (a specialty of most heirlooms) with a nice bit of acidity. Great for salads (especially a Caprese!) or with hamburgers or just on their own. Be aware when planting them that these plants will get tall! Plan on staking them up early and since they often grow to over size feet tall!

San Marzano. These are meant for cooking, rather than salads and resemble Romas. They are great for growing in warmer sections of the country. If you’re up to the task, you can save the seeds from these open-pollinated plants and regrown them the next year!

Arkansas Traveler: This variety hails from, where else, Arkansas and has been around for over 100 years. It likes full sun, is disease-resistant and will give you tomatoes throughout the growing season. 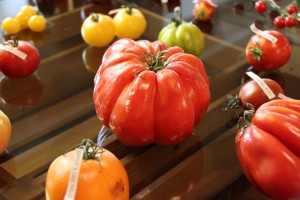 Once you’re sorted through the many types of Heirlooms, how do you plant and nurture them? Good question! Let’s assume that you’re buying commercially grown plants and not growing from seeds. Planting is pretty straightforward. Dig a deep hole in well-drained soil. If you think it makes sense, supplement the soil with compost that can help feed the plants throughout the growing season. It’s important to plant your heirlooms away from your hybrids, to avoid any cross-pollination. Also, stake them up immediately. You DO NOT want the leaves to touch the ground and pick up diseases or pests. Mulching under the plants can also help alleviate this problem, which can be a bit more of an issue with heirlooms, as many varieties are not as naturally disease-resistant as the hybrids are. Maintain a trellis or tomato cage throughout the season and keep tying off the plant as it grows. Remove any yellow leaves and pinch off any grow below the first cluster of flowers. 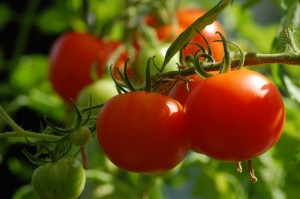 So, that’s a brief look at heirlooms. But what about all those hybrids? The fact is, that while heirlooms have grown in popularity in the last 20 years or so, hybrids remain the standard for most home gardeners. Why? Mostly for the same reasons that commercial growers plant them; consistent color and flavor, consistent taste, consistent size and great disease resistance. Many varieties have also been developed so that they produce fruit earlier in the season, which is particularly appealing in northern areas with shorter growing seasons. You can see the appeal!

Your planting regime remains the same, though always keep an eye out for how high they’ll grow, so you can plan your garden layout accordingly. All tomatoes love full sun. But there is a caveat here. As average temperatures have been climbing, it is fine, particularly in southern climates, to make sure the plants get some shade, particularly in the early-to-late afternoon, when temperatures can rise to their highest level of the day. One other important hint. It is generally agreed that you should never water your tomato plants late in the day. If they need extra water, do it in the morning, so that the leaves don’t stay wet. Better yet, try to only water the root system and avoid splashing the leaves altogether! So let’s wrap up with an overview of a few of the most popular hybrid varieties! 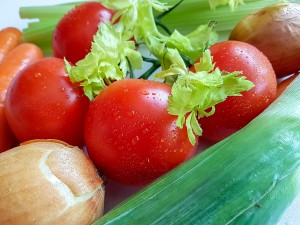 Big Beef. A hugely successful hybrid that creates a nicely sized fruit. It’s easy to grow and very resistant to many of the blights (verticillium, fusarium) and pests (nematodes) that can bedevil lesser cultivars.

Chef’s Choice. A great tasting tomato that also looks beautiful and is very prolific. Good for slicing or canning.

Early Girl. As the name implies, this is a bush that matures quickly and can reach maturity in around 50 days! Some gardeners even plant another set of Early Girls later in the season, so that they’ll have tomatoes almost up until the first frost! 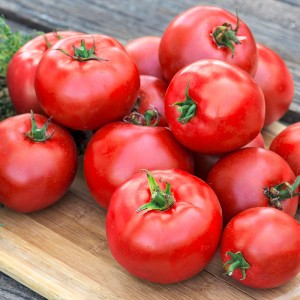 So what’s your pleasure this summer? Heirlooms or hybrids? If you’re like us, you’ll try both. For many folks it takes a bit of experimentation to find the plant that works best in your area of the country, your soil, your garden location and mostly, your taste! Good luck and Great Tomatoes!