Surely you know what a porch swing is. You’ve probably passed a few in your lifetime and maybe even sat on one. My parents used to have a porch swing and it was a retreat that I took for granted. I would watch thunderstorms, have heart to heart conversations, and even sit there annoyed as I waited for my family to get ready to go out. Yes, it was one of those pieces of furniture that really is memorable. Porch swings are very consoling and I still think about getting another one quite often. So, today, I did a little digging and wanted to share some history on the brilliant creation that is the porch swing. Have a seat.

Swings date back to 1450 BC and are common all over the world. However, Charles Wicksteed, a British engineer, is credited as the inventor of playground equipment, including the modern-day swing and slide. Charles is also known for founding Wicksteed Park in 1921, located in Kettering, Northamptonshire, England. But how did the playground swing find its way to the front porch?

In the middle of the 19th century, cities grew larger and families often began to live in separate houses. New neighborhoods were being formed and there were shorter work days. To pass the time, people developed front porches as a way to view their gardens and neighborhood. Instead of observing them from behind a window, they would sit on their porch, allowing them to still be sheltered and in close proximity to their home. Back porches were also common, but in the beginning of the 20th century, the backyard was a less desirable place to be. You would often find things like trash heaps and outhouses there.

Front porches were most popular from the early 1880’s to the mid 1920’s. It was an exciting time because front porches allowed people to socialize, thus inspiring newly built houses to incorporate the addition.

These front porches weren’t particularly big, only about 5 feet wide with a wooden floor and ceiling. Often, they had a very basic selection of furniture as well. Practicality and function were of more importance than style to some, placing unused dining room chairs and the like on their porch. To others, though, specially made outdoor furniture was a must. Chairs would be made of bamboo and wicker to withstand the elements, and cushions were available. At this time, rocking chairs were commonly found on the front porch as well, but the greatest addition was the porch swing.

The porch swing is a swing with the shape of a bench that hangs from the ceiling of a porch by chains or some other form of suspension. It’s elongated to hold several people at once and creates a relaxing rocking motion as it swings.

By the 1950’s, though, the front porch became less popular due to new indoor forms of entertainment like the radio and television. Increased access to automobiles also provided a new method for socializing and reduced the need to sit outside of the home waiting for neighbors to stroll on by. During the 1930’s and 40’s, new houses were no longer built with front porches but rather, a stoop. Patios and decks also became more popular around this time, ensuring privacy in the backyard.

Though, front porches aren’t nearly as popular as they once were, they are making a comeback. And with the front porch comes the porch swing.

A unique aspect about these swings is that they can be hung from nearly anywhere that will support them. Arbors, A-frames, and tree branches could all be substituted for the ceiling. With this in mind, porch swings can really be put in more places than just a front porch. People have been known to hang them from their back porch, a swing stand in their garden, and even indoors.

Here are a few good examples of various types of porch swings. 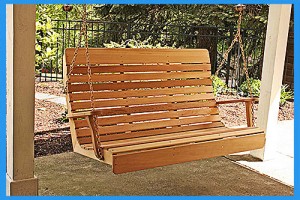 The Red Cedar Royal Highback Porch Swing is not only award-winning in design and comfort, but has earned a recommendation from the Academy of Chiropractic Physicians and was recognized in Parade magazine as a top choice in porch swings. 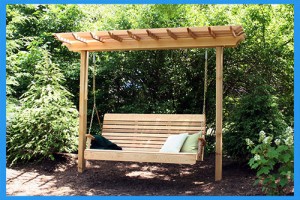 The Red Cedar Marquis Arbor is strategically designed to hold a porch swing and is a great addition for cozier outdoor spaces. 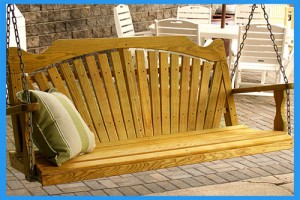 The Treated Pine Fanback Porch Swing is enchanting by design as well as brilliantly constructed. Its classic features bring out the charm of any outdoor living space. 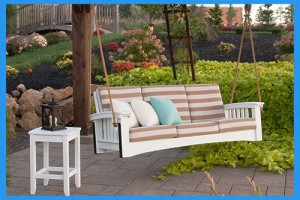 The Cypress Mission Sofa Rope Swingbed with Sunbrella Cushions is the perfect modern mixture of swing and sofa. It is suspended by rope rather than chain and its cushions come in a variety of colors. 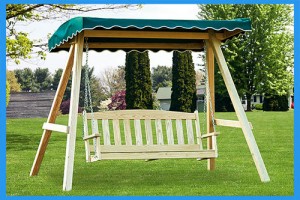 The Treated Pine English Garden Swing with A-Frame Stand & Canopy can be placed anywhere outdoors- like in the middle of your backyard. Even if it rains, you’ll still be able to enjoy time on this swing.

If you’re considering adding a porch swing to your outdoor living space, www.fifthroom.com is a good place to start. Fifthroom offers a variety of styles, materials, stands, and so much more. We can hook you up! Get it? Like a porch swing? Oh, nevermind.

Even if the porch swing isn’t your thing, we have hundreds of other outdoor inspired items like Outdoor Furniture, Garden Structures, and Yard Accessories. Why not check it out? You might just get inspired.