You may not have thought too far into what a Pergola truly is or how it got to be, but this garden structure does have a history that might make you think twice the next time that you see one. The word “Pergola” is actually derived from “Pergula,” a Latin word meaning “Projecting Eave.” These structures are often found covering walkways and roads but also as extensions to buildings and free standing in gardens. They often signify social status because they have such a prominent presence. Pergolas can be constructed out of materials like wood, stone, aluminum, vinyl, and fiberglass.

The history of the Pergola is assumed to date back to 1400 BC, first recognized in a garden plan that belonged to an Egyptian high court official of Thebes. In this garden plan, he had a Pergola over an entryway, so it is likely that this concept was around before his plan was developed. 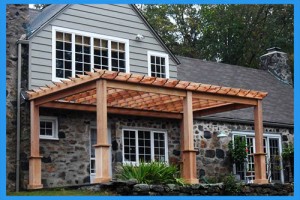 In 1645, John Evelyn made reference to Pergolas by means of the Italian language during the late medieval times. He first used the word, “Pergula,” to describe the cloister of Trinita dei Monti and the structures he saw there. The word “Pergola” was later taken to English in 1654. Around this time, Pergola structures were also starting to appear in Eastern Asia. There, Pergolas had curved beams that seemed to depict the same curved features of their Pagodas.

Pergolas served many purposes that often utilized their practicality in addition to their aesthetically pleasing design. For the rich elite, they were often found as hanging gardens and a structure meant to assist in the growth of certain vegetation as well as vining plants. 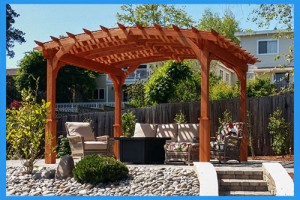 In the 17th Century, the Great Renaissance valued the beauty of the Pergola more than its functionality, leading to a revival of the garden structure. At this time, Pergolas were made to be grand and dramatic. They were often constructed out of smooth stone pillars.

In the 18th and 19th Centuries, interest in Pergolas waned due to the increasing trend of Naturalistic Gardening. But in the 19th and 20th Century, they made a comeback and were very much associated with the Garden Designers Sir Edwin Lutyens and Gertrude Jekyll.

Today, Pergolas thrive among outdoor enthusiasts who appreciate the beauty and performance of the garden structures. For more information, visit www.Fifthroom.com, where you can view a variety of different styles and materials as well as customize your own.