Rocking Horses are widely recognized as toys of old and are very common around Christmas time. Though, these pieces are familiar, do we really know much about them? Today, we’ll be taking a closer look at Rocking Horses and how they came to be. 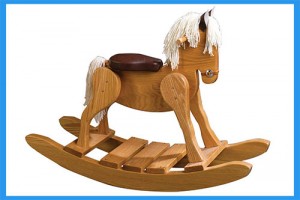 It is unknown who invented the rocking horse as well as the place it originated. What we do know is that the oldest rocking horse still in existence today dates back to 1610 and is believed to have belonged to King Charles I.

The Rocking Horse was the result of many designs of toy horses. Back in the Middle Ages, the Hobby Horse was common, and was composed of a long stick with a fake horse head at the top. Children would pretend to ride this horse around but soon found that improvements could be made.

In the 16th Century, the Hobby Horse was replaced by the Barrel Horse. This toy used a log as the body and was held up by four legs. It, too, had a fake horse head and seemed to better mimic a real horse than the Hobby Horse. 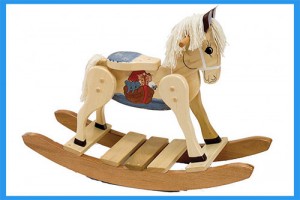 Finally, in the 17th Century, the Rocking Horse that we’ve come to know and love first appeared. At the time, it was made of solid wood and had a high center of gravity. This design was dangerous in that it lent to the opportunity for the Rocking Horse to fall over and potentially hurt the rider.

In the Victorian age, a safety stand was added to the Rocking Horse. The toy was also redesigned to be lighter and more stable due to the hollowing out of the wood. Secret compartments were also introduced. These compartments were meant to house heirlooms and small items like trinkets and photographs. The compartment was built into the belly of the horse and provided additional lure with a secure place to hide keepsakes.

Queen Victoria was very fond of Rocking Horses, particularly the Dappled Gray Rocking Horse, and fueled their popularity at the time, but as years went on, the toy seemed to be in a decline. 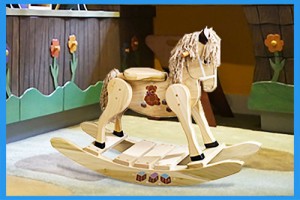 During the 20th Century, Rocking Horses were put on the back burner along with many other luxuries so that people could focus on matters like the World Wars and the Great Depression. By the 1960’s though, the Rocking Horse made it’s return both in it’s former glory and in various modern designs.

Typically, Rocking Horses are made for children ages 1 to 6, but in all honesty, if I could find an adult rocking horse, I am not ashamed to say that I’d try it. There is something so delightful and wholesome about this toy that makes it so timeless.

If you’re looking for authentic Rocking Horses, Fifthroom.com is the place for you. Check out our variety now, and perhaps give some feedback on what you like most about them.