If you haven’t heard of Quoits before, you’re not alone. There are many outdoor games that have become relatively more common, but this particular game has quite a history. Quoits is a traditional game that involves throwing rings, or quoits, across a distance towards a target, usually in the shape of a spike. These rings can be made of various materials like rubber, rope, or even metal, and range in weight. The concept of the game can be rather similar to the game of cornhole, horseshoes, or discus throwing, depending on the variation of Quoits you choose to play.

This particular game started out as a pub game and is not necessarily regulated by a national governing body. Because of the lack of regulation, there are many different variations of the game, both in rules and equipment. The best thing to do when in doubt is to follow the local rules when playing. Technically, under these conditions, you could make up your own rules if you really wanted to.

There are many different styles of Quoits and their origins can be traced back to various regions including places like Wales and Scotland. This game was brought to the Americas by English Colonists and is widely believed to have been played in the Olympic Games over 2000 years ago in Ancient Greece. 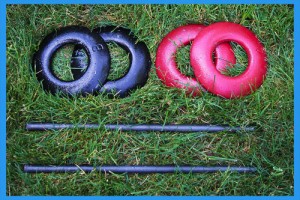 Today, we’ll be looking into Sward or Lawn Quoits. This version is relatively simple and can be played anywhere where there is a large, flat, area. Typically, traditional games of quoits require a clay pit, but we have come a long way since then and no longer require this method of play. The Lawn version is often much less serious and is easier to set up.

Lawn Quoits is played similarly to the game of cornhole, but instead of large angled boards, there are two iron stakes, also known as hobs, pins, and motts, placed at opposite ends of an open space, generally 33-54 feet apart. The distance really depends on the players, though. Some games are played with only a distance of 8.5 feet between the stakes. The condition of the ground can also play a major role in what policies and regulations are followed in a typical game. It’s ideal to go over the rules and regulations with each player beforehand because it can get awfully frustrating learning them on the fly.

A single game is usually played by two people. These two individuals play from the same end of the open space, usually next to the stake that is directly across from the one being aimed at. There, they each take a turn throwing two quoits towards the opposite stake. Once one player has thrown both of their quoits towards the stake, the second player now has an opportunity to knock the first players quoits into a new position. The goal is to get your quoit centered on the stake or as close to it as possible. Getting a quoit on the stake would result in a higher amount of points, but it does not necessarily mean that this is the only way a player can win. Sometimes, just using your quoit to knock the other player’s quoit into a losing position is rewarding enough.

If you’re interest in trying the game for yourself, visit Fifthroom.com to learn more. 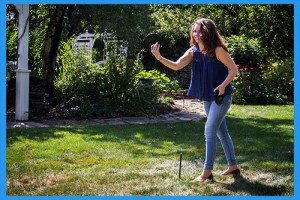