Whether you start a fire with matches, a lighter or sticks or stones, fire has been central to our lives since man figured out how to use it over 700,000 years ago. Once man discovered fire, he was then seized with a desire to master it!. Eventually, man realized that by concentrating fire in a hole in the ground he could control the spread of it more effectively and could also maintain greater heat output. 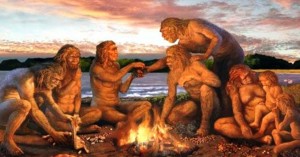 Man’s first use of a fire pit dates back to the Mid-Paleolithic Period, some 200,000 to 400,000 years ago. Archeological evidence from sites such as the Tabun Cave at Mt. Carmel in Israel and the Klaises River Caves in South Africa shows that fire pits were made using a collection of stones to contain the fire and to keep it from spreading. Other cultures used a simple hole in the ground filled with hot coals and stones for both warmth and in-ground cooking. Peruvians, Eastern Indians and many Polynesian tribes used in-ground pits to cook for large numbers of people during harvest and festival times as well as for religious ceremonies. Fast forward to the frontier days of the “Wild Wild West” in the USA; Native Americans used fire pits for heating, cooking and also as a ceremonial focal point during tribal councils. As settlers from the eastern US moved west, they adopted the use of the Native American fire pit for their own heating and cooking needs. 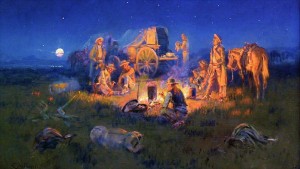 The construction of fire pits has changed a great deal over the years. As man learned to work with metals, in-ground heating and cooking moved above ground. Different styles of fire pits emerged as different cultures found new ways to shape and form metal.

Modern fire pits have evolved into a variety of shapes and styles. Chosen wisely, they can be works of art which make a dramatic decorative statement while keeping you warm (and outside) as temperatures start to cool down. Fire pits are one of our specialties at Fithroom.com and here are some of our favorites:

Third Rock. This dramatic looking fire pit lights up the night to show all of the continents in their glory. Our Third Rock fire pit truly makes a statement and is perfect for homes or businesses. Each piece is signed and numbered by its craftsman. 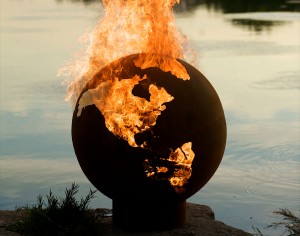 Saturn. Reminiscent of the rings of Saturn, the Saturn fire pit takes you further into our solar system. It features an iron oxide patina on the exterior along with a high temperature painted interior. Each piece is numbered and signed. 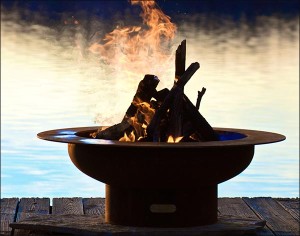 Beachcomber. Constructed of ¼” American carbon steel, Conch, Nautilus and Scallop sea shells, our Beachcomber Fire pit will remind you of endless summers by the sea. Its design complements both seaside and land-side locales! 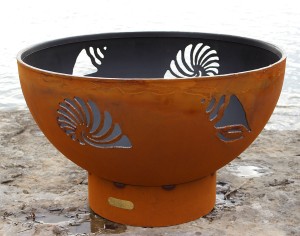 Manta Ray. Inspired by the flowing motion of the graceful Manta Ray, this fire pit is a work of art and a perfect combination of form and function. Like our Third Rock fire pit, the Manta Ray is constructed of American carbon steel and is signed and numbered by its craftsman. 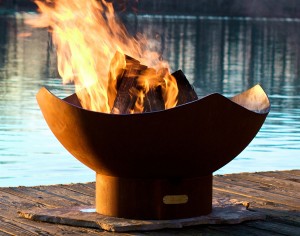 Barefoot Beach. Classic seashell design brings the beach to your backyard. This fire pit is perfect for residential use, but it is also a great choice for commercial use on your company’s campus or in a park. Made In The USA, constructed of high strength American carbon steel. 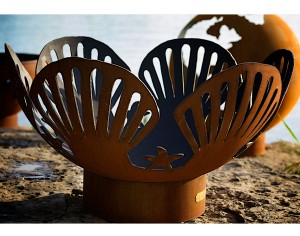 Asia. With its low profile design, the Asia fire pit is elegance itself and will quickly become the centerpiece of your backyard. Like our other fire pits, every Asia fire pit is numbered and signed by its craftsman. 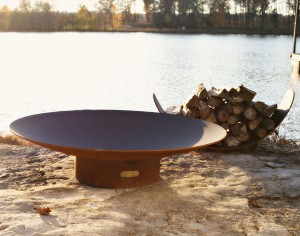 Fleur De Lis. Translated to mean “flower of the lily,” our Fleur De Lis fire pit is both graceful and stylish, an elegant combination of function and form. Constructed of American carbon steel, this fire pit is perfect for either residential or commercial use. 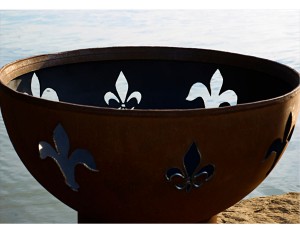 Fire pits are so beautiful and even better, extend your outdoor season immeasurably. There is absolutely nothing better than sitting around the fire pit with family and friends (while perhaps enjoying a few cold weather libations!) as the cool fall months come along. It’s time to get fired up now!