If you’ve been on the lookout for some unique destinations, this might just be the one for you. Beyond taking guided tours through the legendary cobblestone roads and the Queen Anne styled homes of Charleston, South Carolina, you may want to take a closer look at some of its historical roots.

Deep in the forest lies the magnificent Angel Oak Tree with its vast array of spiraling branches and winding roots. Today, we’ll be looking into what makes this particular tree unlike the rest. 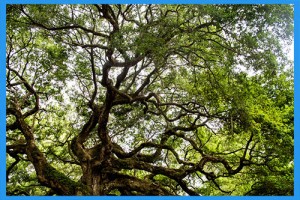 The Angel Oak is a surreal experience not due to its height, which is only about 66.5 feet tall, but because of the spread of its limbs. The branches of this tree extend in an assortment of directions, curling and writhing to a diameter of about 160 feet. It shades an area of 17,00 square feet below and is almost too much for the eyes to take in.

It is unusual for an Oak tree to be so dense and rigorous, thus raising the debate on the age of this tree. Arguably, the tree is said to be anywhere from 400 years old to 15,000 years old.

The complicated patterns of this tree provide for an exceptional experience that draws many to visit it. It has become popular not only among locals and tourists, but by the likes of professional photographers and those looking for a distinctive venue. Wedding ceremonies, events, and gatherings have become relatively common in the presence of the Angel Oak, but this tree has seen much more than what the world is today. 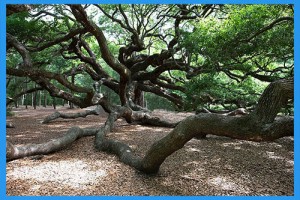 Historically, the Angel Oak has been the rumored location where African American families and Civil Rights activists such as Septima Clark have found a place to gather during the times of segregation.

The tree remained a hidden gem for many years until 1991 when the city of Charleston had afforded the effort to acquire the tree from its original owners. Their names were Justis and Martha Angel, after whom the tree was named. At this time, a conflict arose around the future of the tree and its surrounding forest area. The possibility of new developments in the location angered the locals and arborists who have long found the tree to be sacred. Though, the Angel Oak may have been spared, the surrounding forestry was essential for its survival. Endangering the tree’s habitat proved all too much a risk causing organizations, both private and public, as well as individuals, to make donations intended to acquire a land grant that could preserve the tree and its surrounding area. With all of the effort and outcry, the endeavor proved successful and the tree and its neighboring forestry continue to thrive. 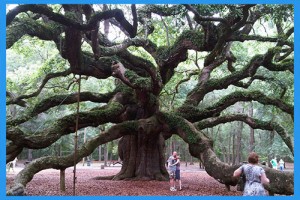 In 2014, construction did occur, but only to create a public park that showcased the Angel Oak. Today, it is still considered a historical landmark and a remarkable destination for all who look to take a trip into the past.

Visiting the Angel Oak is free of charge, but it is guarded against vandals by means of a gate that closes at 5pm. During visiting hours, though, you may not climb the tree, but you can take photographs and even hug it- if you’re into that.

Visiting the Angel Oak may provide a sense of significance that you can carry into your own outdoor space. With the likes of greenery and serenity, you may be able to pay homage to such a determined tree. But don’t forget to showcase your property with the help of Garden Structures, Furniture, and Accents. Fifthroom.com has everything you need to make it divine.